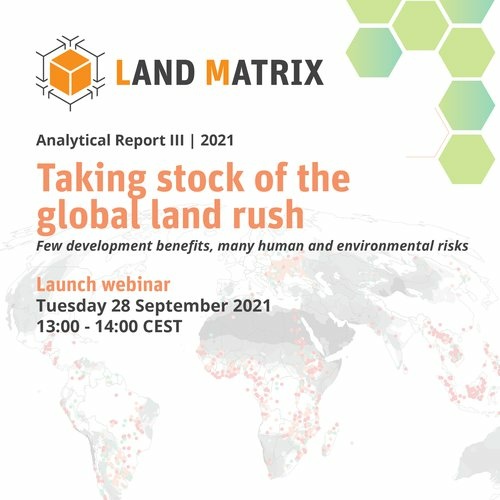 In this webinar, taking place on Tuesday 28 September 2021 from 13:00-14:00 CEST, the Land Matrix Initiative (LMI) will launch its third analytical report, “Taking stock of the global land rush”. The webinar will present an opportunity to discuss the findings and policy recommendations emerging from the report with its authors as well as other prominent experts in the field.

More than 10 years after the surge in large-scale land acquisitions (LSLAs) in developing countries following the spike in agricultural commodity prices in the late 2000s, the LMI has taken stock of the “global land rush” and its socio-economic and environmental impacts in its latest analytical report. The findings of the report are sobering, in part alarming, and highlight the urgent need to rethink LSLAs, which have reached a staggering total targeted size of 33 million hectares for agricultural and transnational deals.

Specifically, the report shows that, since a large fraction of the targeted area has yet to be put into agricultural production, and that expanding production poses a significant threat to rural livelihoods and natural habitats, swift and decisive action is needed to protect both. The report also shows that the non-consensual and uncompensated loss of land experienced by local communities often comes with only little socioeconomic benefits. Besides economic woes, LSLAs continue to destroy rainforests, natural habitats, and biodiversity on the agricultural frontiers. Overall, although progress has been made in terms of land governance, a lack of policy implementation in this area is evident. This is particularly apparent from the LMI’s assessment of the application of the Voluntary Guidelines on the Responsible Governance of Tenure (VGGTs) and the dismal transparency of most land acquisitions.

Register for the webinar here
French and Spanish interpretation will be available.