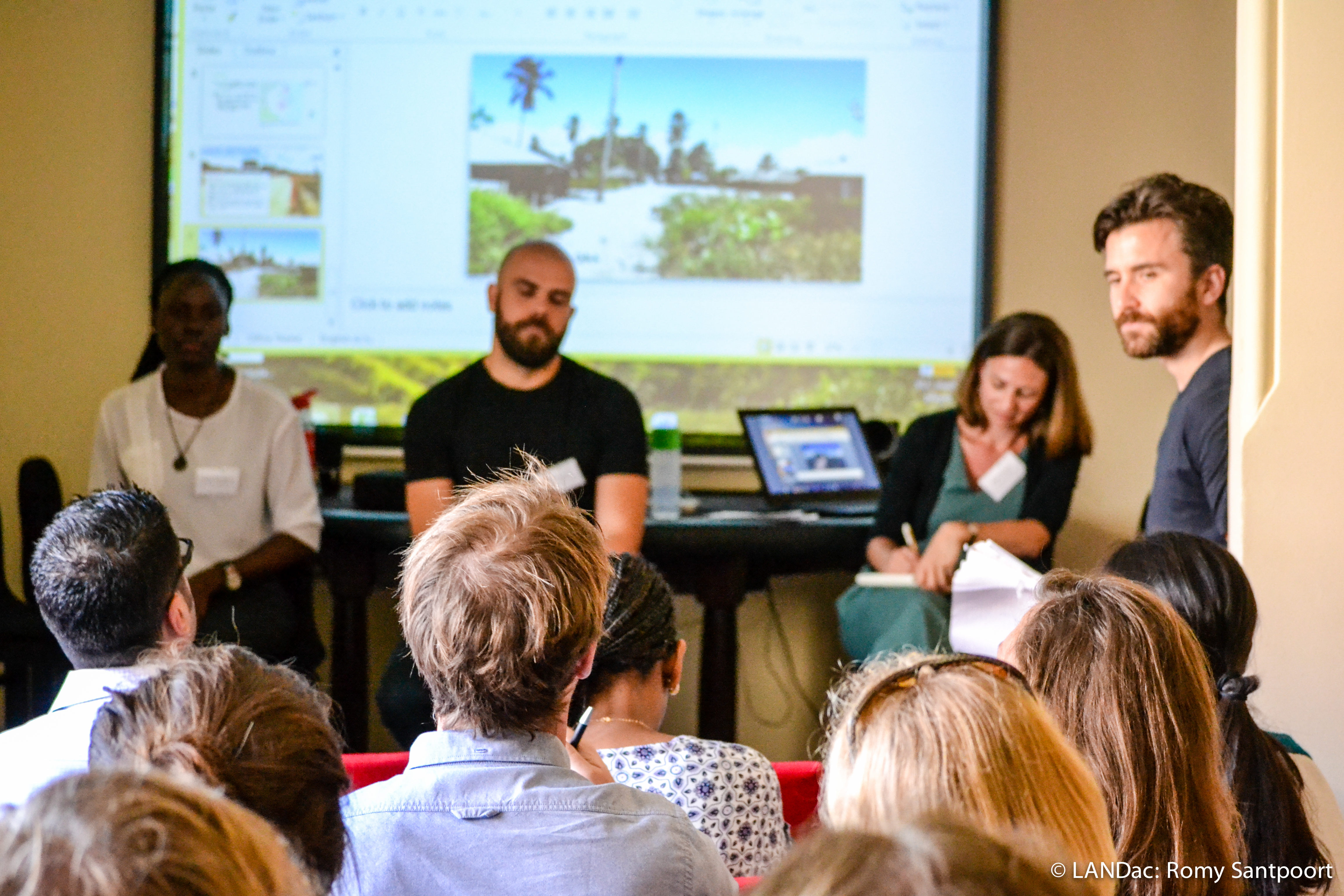 The preliminary programme of the LANDac Online Encounter 2020 is now available on our website! Download the programme here.

Read more on the Online Encounter and register! 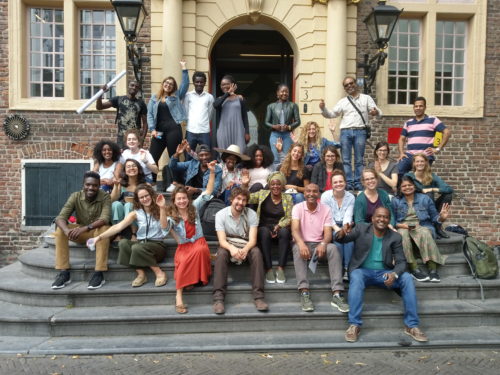 Every summer, LANDac organises the ‘Land Governance for Development’ Summer School in Utrecht, the Netherlands.

This year, however, due to the global COVID19 pandemic, the Annual Summer School takes place online! Covid-19 and the measures taken worldwide to curb the pandemic are of great concern to the land governance community, as alarming observations are coming in about the loss of livelihoods and deepening poverty, government crackdowns on civil society, the suspension of land administration services and irregular land acquisition. We will also reflect on these current developments and immediate effects of the pandemic, and how it might change the future work and priorities of the land governance community.

For more information, download the full programme above. This year’s course fee is 100 euros.

In collaboration with the MDPI Open Access journal Land, LANDac has published three open access papers on ‘Land Governance in Transition: How to support transformations that work for people and nature?’.

Abstract:
The livelihoods of indigenous peoples, custodians of the world’s forests since time immemorial, were eroded as colonial powers claimed de jure control over their ancestral lands. The continuation of European land regimes in Africa and Asia meant that the withdrawal of colonial powers did not bring about a return to customary land tenure. Further, the growth in environmentalism has been interpreted by some as entailing conservation ahead of people. While this may be justifiable in view of devastating anthropocentric breaching of planetary boundaries, continued support for “fortress” style conservation inflicts real harm on indigenous communities and overlooks sustainable solutions to deepening climate crises. In reflecting on this issue from the perspective of colonial land tenure systems, this article highlights how ideas—the importance of individualised land ownership, cultivation, and fortress conservation—are intellectually flawed. Prevailing conservation policies, made possible by global non-governmental organisations (NGOs) and statutory donors, continue to harm indigenous peoples and their traditional territories. Drawing from the authors’ experience representing the Batwa (DRC), the Ogiek and Endorois (Kenya) and Adivasis (India) in international litigation, this paper examines the human and environmental costs associated with modern conservation approaches through this colonial lens. This article concludes by reflecting on approaches that respect environmental and human rights.

Abstract:
The core neoliberal strategy of Chilean agrarian politics has lasted now for more than 30 years. Despite minor reforms, its fundamental pillars remain in place. While members of the agribusiness sector consider this strategy to be a role-model for food production leading to explosive economic growth, the last decade exposed its socio-ecological limits, such as declining water availability and increased conflicts over land. Taking critical literature on neoliberalization as a theoretical approach, we used law and literature reviews as well as qualitative interviews with actors from the public and private sectors to reveal the details of the strategies in the exporting agriculture sector in Chile. From the understanding of neoliberalization as a multi-layered process, we analyzed the data, focusing on three dimensions of agribusiness in Chile: (a) regulation, (b) spatial fix, and (c) ideological paradigms. In doing so, we uncovered how far the coping strategies chosen by the state and private sector have re-designed and strengthened the process of agriculture neoliberalization in order to push its own socio-ecological limits.

Abstract:
Maize has become the second most produced crop in the world. Specifically, in sub-Saharan Africa, global statistics show that more and more land is being used for (small-scale) maize production to meet future food demands. From 2007 to 2017, the area on which maize is grown in sub-Saharan Africa has increased by almost 60%. This rate of expansion is considered unsustainable and is expected to come at the expense of crop diversity and the environment. Based on available literature, this paper explores the political and economic processes that contributed to the increased use of land for maize production in sub-Saharan Africa. It discusses population growth as an important driver. Moreover, it unravels some of the politics and narratives triggered by climate change that have paved the way for policy measures that aimed to boost maize production in the region. These measures, which often emphasize the need for increased production, the need for new technologies and resource scarcity, overlook the largest group of maize producers that are least powerful, but most crucial for food security in sub-Saharan Africa: smallholder farmers.

These papers are part of the LANDac Annual International Conference 2019 – Land Governance in Transition: How to support transformations that work for people and nature? More information on the 2019 conference and other outputs can be found here. 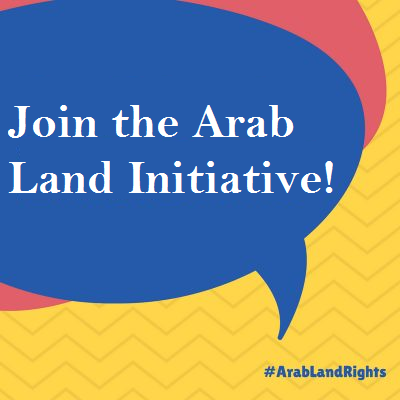 This call for research grants addresses students and young land professionals interested in conducting research on land governance-related topics in one or several countries of the Arab region. The call seeks to promote interest in land-related research and to gather innovative ideas and approaches by supporting and motivating future academic and professional leaders in the field of land governance. It is open to Masters and PhD students with interest in land management and land-related topics in one or several countries in the Arab region, land professionals and practitioners working on land related projects in the Arab region and young scholars working in universities or other relevant research institutions conducting research dealing with land issues.

The deadline for submission of abstracts is Wednesday 15 July 2020.

See here a link to the web page and find more information in the attachment.

IIED | Blog: Stopping land and policy grabs in the shadow of COVID-19

In this blog, Cotula argues that reports suggest the COVID-19 fallout is providing opportunities for elites to seize lands and rewrite regulations. We need effective responses to secure land rights and lay the foundations for a just recovery.

RVO (Netherlands Enterprise Agency) is pleased to share an update regarding the second call for project ideas for the LAND-at-scale programme.

LAND-at-scale received 25 new ideas from 19 different countries. These new ideas are now being reviewed and ranked by the LAND-at-scale committee in close collaboration with embassies. This means that LAND-at-scale’s portifolio might grow even more in the coming month.

At the same time, LAND-at-scale is working hard to reduce the effect of COVID-19 on the programme activities, together with its embassies, the LAND-at-scale committee and other partner institutions. They are committed to avoiding too many delays. However, the health and safety of their partners come first. 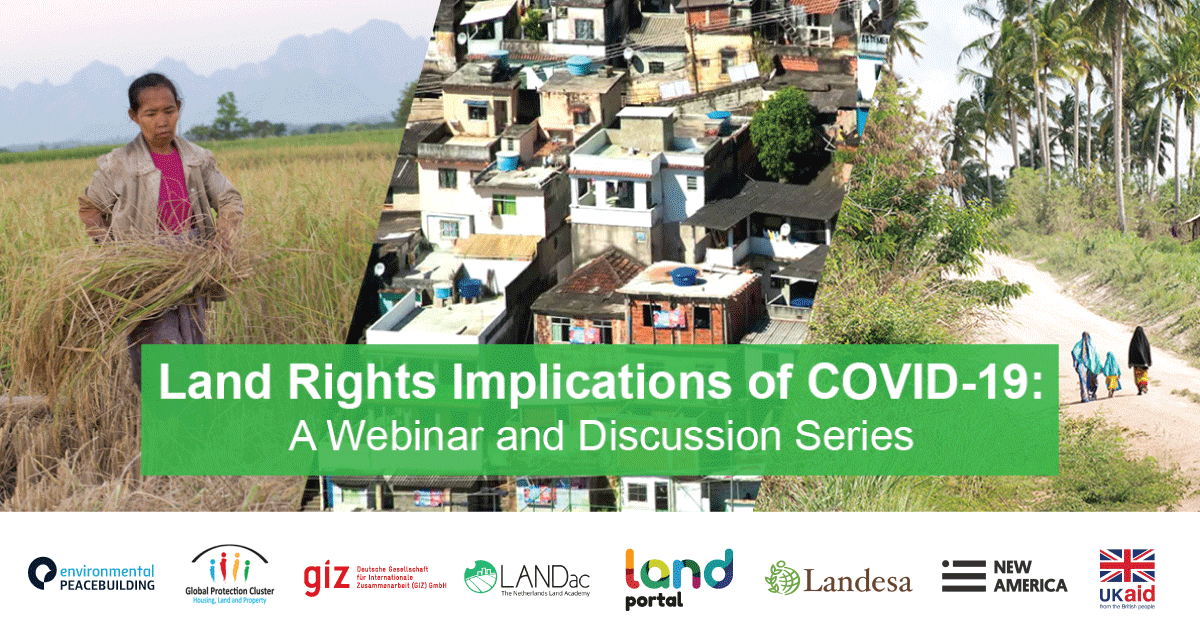 Land Rights Implications of COVID-19: A Webinar Series and Discussion

Land Rights Implications of COVID-19: A Webinar Series and Discussion

Join us for the Land Rights and COVID-19 webinar and discussion series, which is presented by Land Portal, Landesa, the Global Protection Cluster HLP AOR and GIZ, with organizing support from Environmental Peacebuilding Association, LANDac, New America and the UK’s Department for International Development (DFID).

As governments press pause on economic activities and people change their work and social behaviors to halt the spread of COVID-19, there are several hidden dimensions that can put pressure on land governance and management and threaten the land rights security of millions worldwide. The response to the pandemic has unfolded like a slow-moving natural disaster, disrupting the daily pattern of our lives and revealing stressors on our institutions. And like a natural disaster, how countries and communities prepare – both before and after a catastrophic event – can be the difference in long-term prospects for resilience and recovery.

What steps can individuals and communities take to ensure they have the right to retain or return to their land and productive assets? How will COVID-19’s impact on the global food systems affect countries that rely on food imports? How can governments maintain land administration amid the disruptive nature of the pandemic? How will immigration and internal migration contribute to the “de-urbanization” of cities and increase demand for land in the countryside? What are the impacts of COVID-19 on housing? What are the gender dimensions of land rights in households where shelter orders are changing social behaviors?

This series of webinars and subsequent discussion seek to develop a set of actionable recommendations to policy makers, as well as practical recommendations based on what is happening on the ground. We aim to identify both short term and longer term actions that can effectively contribute to supporting land governance stakeholders facing an ongoing pandemic, while looking forward to post-pandemic priorities.

Register now for the webinars: 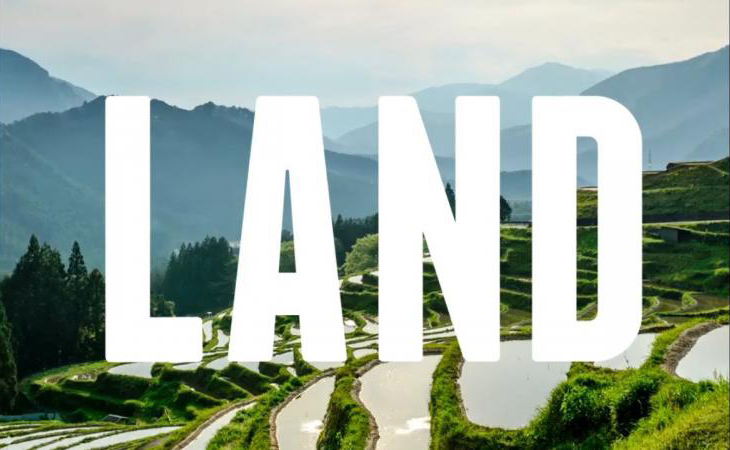 The UNCCD is now commissioning a small number of working papers for the second edition of the GLO around the following themes: youth, urban-rural interface, tenure & resource rights, perverse incentives, gender and food system resilience.

GLO2 will primarily aim to support the effective implementation of the United Nations Decade on Ecosystem Restoration, being led by FAO and UNEP (https://www.decadeonrestoration.org/).

In addition to providing substantive content and diverse policy perspectives for GLO2, working papers are expected to compile innovative case studies, on-the-ground examples and good practices from a wide variety of sources and countries. GLO2 will be launched at the UNCCD’s 15th meeting of the Conference of the Parties to be held in September or October 2021.

We cordially invite you to present your PhD on this blog! All accepted and published blog posts will be featured in the fortnightly EADI newsletter and via social media. During the publishing process, we will help you with the editing and with becoming familiar with the rather casual and journalistic blogging style.

In October 2020 we will choose the most inspiring three articles for the blog prize. The first prize will go along with a funded invitation to the next major public EADI Event ( Directors’ Meeting or General Conference). These meetings are an invaluable opportunity for connecting and networking and provide first-hand insight into topical discussions between development research institutes.

Authors of the best three articles will receive hard copies of our edited volume “Building Development Studies for the New Millennium”, as well as a free EADI membership which includes access to our journal, the “European Journal of Development Research (EJDR)”

Requirements:
All PhD students in Development Studies or a related field in the final phase of their PhD or up to one year after its defence are eligible to submit.

Proposed blog posts must be between 6000 and 9000 characters long, including spaces. They must be written in a casual, rather journalistic language, and should provide references in the form of hyperlinks instead of footnotes. They should include a meaningful image in landscape format or provide a link to a suitable image under a creative commons licence.

We recommend to follow guidelines for successful science-blogging on development issues, which are available for example here and here

Submissions can be either new blog posts or posts that have already been published elsewhere. In such cases, republishing consent of the initial publisher must be sought beforehand

Selection Criteria for the prize

The EADI Sub-Committee on young researchers will make the selection according to the following criteria:

Please submit your proposal, together with a short CV and proof of your PhD status, to editor_enews@eadi.org. We look forward to receiving interesting contributions!

In addition to providing substantive content and diverse policy perspectives for GLO2, working papers are expected to compile innovative case studies, on-the-ground examples and good practices from a wide variety of sources and countries. GLO2 will be launched at the UNCCD’s 15th meeting of the Conference of the Parties to be held in September or October 2021.

More information can be found here.